It is widely known that, in Europe, young people were one of the categories highly affected by the economical crises.
As regards the situation of young graduates and their extent of absorption on the labour market in Romania, the situation is not so good according to statistical indicators. In the second quarter of 2010 the unemployment rate was the highest: 20.5% for youth 15-24 years. Unemployment affected to a lesser extent higher education graduates, for whom the unemployment rate was of 4.1% and 5.7%, respectively, compared with the 8.0% rate recorded for the unemployed with secondary education.
Even though the situation has improved in the last years, and the rate of youth unemployment in 2020 is 15,43% according to https://www.statista.com/statistics/812916/youth-unemployment-rate-in-romania/, young people still face a lot of challenges when trying to find a job. One of the possible reasons could be that workforce shortage is concentrated in some areas like services (3.4 percent job vacancy rate in 2018), transport (1.9 percent) and IT (1.8 percent), a consequence of the fact that much of the economic growth in Romania is the product of a consumer bonanza, stimulated by years of wage-led growth government policy.
Given the situation, it seems normal that a number of national and European initiatives were proposed to support young people in finding a job and improve their representation on the labour market. One is these initiatives is the Youth Employment Initiative that exclusively supports young people not in employment, education or training in regions experiencing youth unemployment rates above 25%.
Taking into account the high youth unemployment rate in Romania, an amount of 328.905.184 million Euros was granted to our country. More precisely, during 2014-2020 employers received
different bonuses and took advantage of different facilities to hire young people. However, as the EU commissioner, Corina Cretu, declares in an interview, only less 3% of this amount was used. Unfortunately, we are the only country in such a situation. 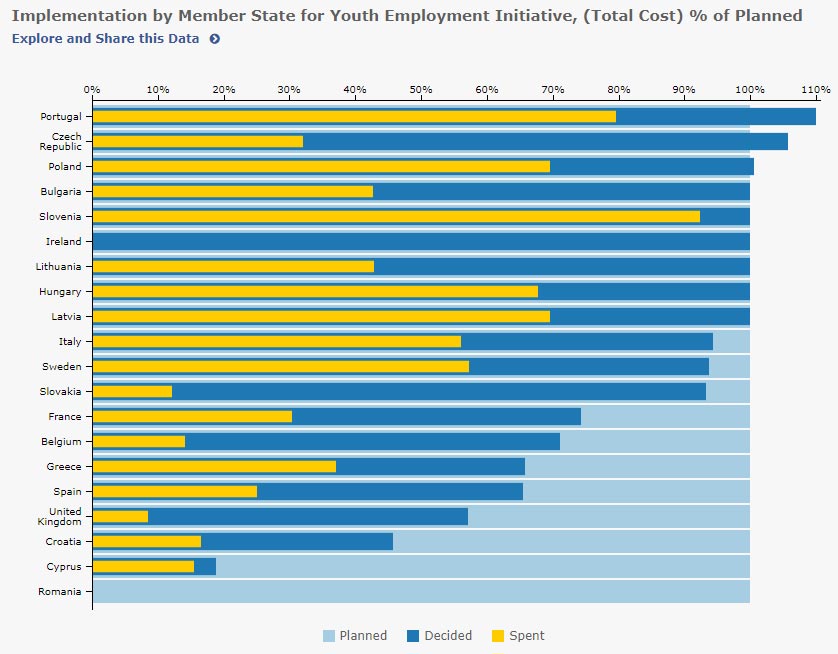